What you need for THURSDAY:

For each camper:
One medicine cup
One gallon sized baggie
A different brand of diaper (if there is only one camper-there will be two diapers so that a comparison can be made.)

Objectives:
To define what a hydrogel is and how it is used.
To explain how hydrogel monomer units interact to form hydrogel polymers.
To develop and refine observation skills and to generate questions.
To investigate the physical and chemical properties of a hydrogel.

Background: What is a polymer?
Exerpted from Brittanica Kids https://kids.britannica.com/students/article/polymer/276496

The term polymer is a composite of the Greek words “poly” and “meros”, meaning “many parts.” Polymers are large molecules made of small, repeating molecular building blocks called monomers. The process by which monomers link together to form a molecule of a relatively high molecular mass is known as polymerization.  Many polymer molecules are like chains where the monomer units are the links. Polymer molecules can be straight-chains or they can have cross-linking between chains. 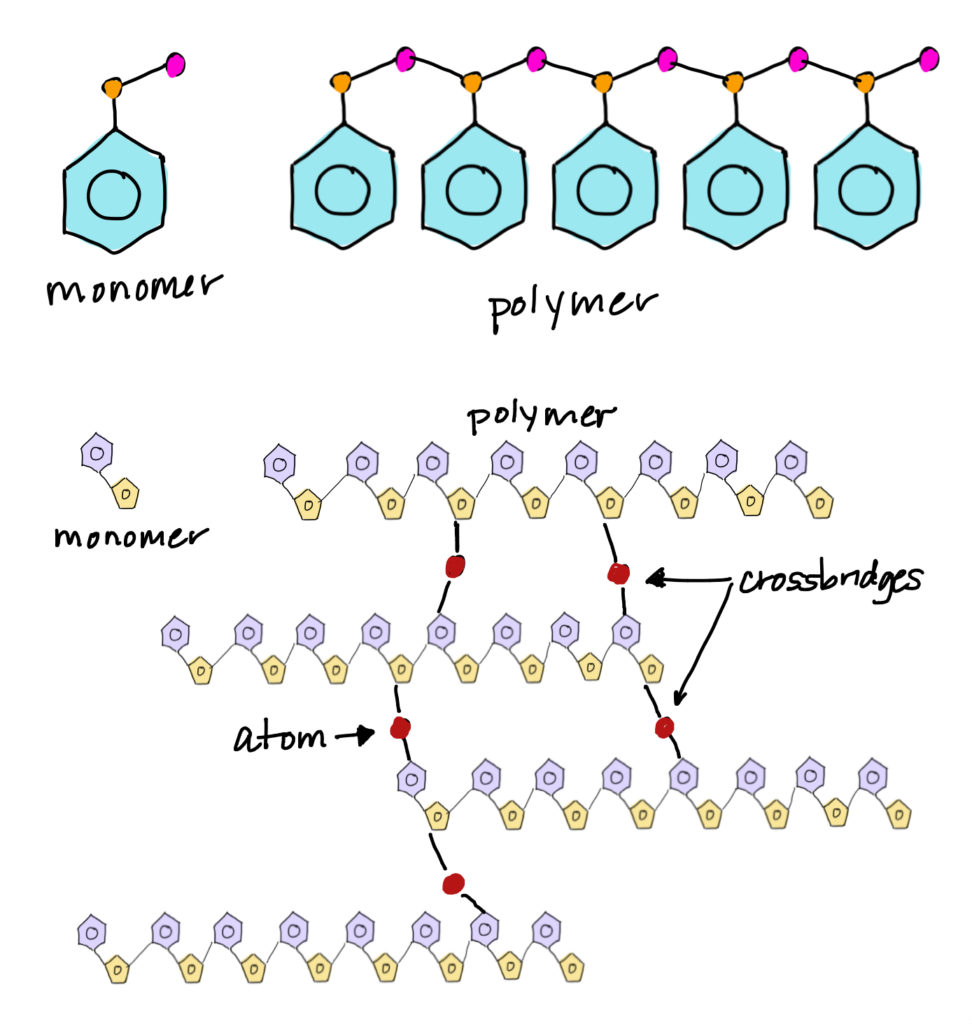 Polymers make up many of the materials in living organisms. Proteins are polymers of amino acids, cellulose is a polymer of sugar molecules, and nucleic acids such as deoxyribonucleic acid (DNA) are polymers of nucleotides. Many synthetic materials, including nylon, paper, plastics, and rubbers, are also polymers.

A variety of simple molecules join together to become useful polymers. The nonstick cookware coating known as Teflon, for example, is made of a monomer composed of two atoms each of fluorine and carbon. Both Plexiglas and Lucite are made of methyl methacrylate, an organic monomer composed of carbon, hydrogen, and oxygen. Silicon polymers used for sealants and other applications are made from inorganic monomers that contain silicon atoms.

Hydrogels are man-made substances that absorb water and hold it in the form of a gel. They’re used in disposable diapers, sanitary pads, breast pads, wound dressings, breast implants, and contact lenses. Hydrogels are also used to thicken products such as bubble bath and lotions and give them a silky, moisturizing feel.

Today, we will be looking at the polymers that make cross-linking chains and are able to hold water.  They are called super-absorbant polymers (SAP) and hydrogels.

Dissecting a Diaper to Investigate Polymers

Part A: EXPLORE: What is a polymer?

If you are making your own data chart, you can use the suggested design to help you.

If you want to learn more about polymers, try this! https://www.pslc.ws/macrog/kidsmac/basics.htm

Part B: DISSECT: What is the anatomy of a diaper?

To dissect means to separate something into pieces in order to study its internal parts.

A diaper has been designed to keep a baby dry by keeping moisture away from a baby’s skin.  The hydrogel most commonly used in diapers is sodium polyacrylate.  It’s added to the core of disposable diapers to soak up urine. This helps to prevent diaper rash.   The diaper is also designed to prevent urine from leaking out of the diaper to keep the baby’s clothing dry.  The anatomy of the diaper is a good example of chemistry and engineering working together to solve a problem.  Let’s dissect the diaper and analyze the design!

For each camper:
One gallon sized baggie
One medicine cup (reuse the a medicine cup from Part A)
A brand diaper (if there is only one camper-there will be two brands of diapers to be compared.)
Scissors

To share:
Newpaper, large plastic garbage bag or another material to cover your workspace and make cleaning up easier

Part C: INVESTIGATE: How much water can different brands of diapers hold?

There are many brands of diapers.  When we dissected your diaper, you removed the sodium polyacrylate from each of the different brand’s diapers. Does one brand work better than another? You can test this out! We want to test our question in a scientific way. This means that we need to do EXACTLY THE SAME THING to the polymer from each diaper.

For each camper:
The polymer that has been removed from the diaper.
Gallon sized plastic bag

To share:
Measuring cups from your kitchen (optional)
Salt
Spoon

Procedure:
We want to know how much water is absorbed by each brand of diaper.  You will be deciding on your own method for testing the different diaper brands.  How can we test the polymers in a scientific way?

To safely clean up the polymer:
Add a few teaspoons of salt, stir it with a spoon, and watch what happens. Salt messes up the gel’s water-holding abilities. When you’re finished, you can pour the saltwater goo safely down the drain.

How do we set up an investigation scientifically?

Whenever we do a science experiment, we follow certain steps to make sure that the experiment will be fair and that it will test what we want it to test. For example: We did an experiment to test whether different brands of diapers hold different amounts of water.  We wanted to make sure that our results were just from the brand of diaper and not from some other factor.

When we tested the effect of the diaper brand on the amount of water it can hold, we tested several brands of diaper. The brand of diaper is our manipulated variable. All other variables, (the sodium polyacrylate, the size of the baggie, the way you added the water) would remain the same and we’d call them constants. They have to stay the same for the experiment to be a fair and accurate test. You can imagine what would happen if we just poured some water in the bag for one diaper and didn’t do the same for the second diaper. Or if we mixed the water in the bag for diaper 1 and didn’t mix it in the other bag for diaper 2. We might lose track of the amount of water. The responding variable in this experiment was the amount of water the polymer could absorb. This variable is what we want to observe and record.  This makes the comparison more useful to a consumer!

What is happening when we add water to the powder in the diaper?

The sodium polyacrylate is an SAP or superabsorbant polymer.  As a polymer, it is a long chain of repeating molecules called monomers.  Superabsorbant polymers expand when water is added because the water is pulled into the polymer.  The water sticks to the long chains so the sodium polyacrylate acts like a giant sponge.  Some SAPs can absorb more than 500 times their weight in water!

The polymer is spread out in the center of the diaper using the cotton fibers that you dissected out of the diaper.  This will make sure that the water is absorbed evenly across the diaper.  Otherwise, as the baby filled the diaper, the diaper would get lumpy and uncomfortable for the baby to wear.  Even the smallest amount of powder will hold a lot of water so the diaper design will help to keep the baby dry.

The polymers in diapers can be a problem if we don’t remember that the powders are so absorbant!  A diaper that is worn in a swimming pool will quickly absorb lot of water.  If they fill too much, the diaper will break open and the polymer will leak into the pool water.  This is not good for the filtering system of the pool.  Some people will flush diapers down the toilet.  What do you think will happen as diaper moves with the water through the pipes?